I made this card for my Papa on his birthday a couple of years ago but forgot to post it. My Papa has a bit of a spiritual connections to birds. I drew part I of the story for his birthday the previous year, see here. For those of you that are Papa fans, you definitely want to read his write up of his experience in this illustration: 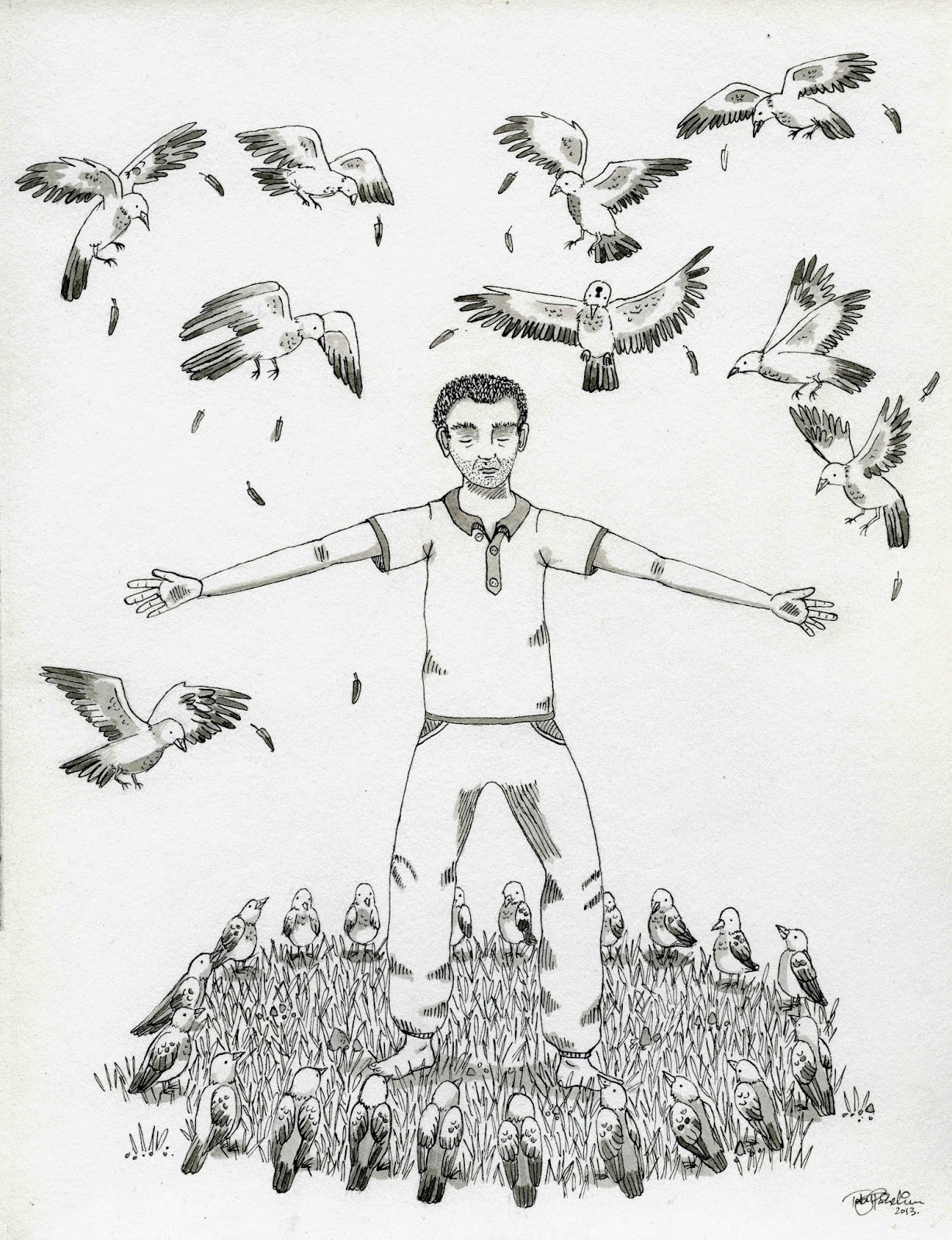 Synchronicity at Allan Gardens:
The following synchronicity would be a most unusual event under most circumstances but because of the exact moment in which this happened, the odds at it being 'just a coincidence' are astronomically large and has served to change my perception of the world.

This would be the third synchronicity involving birds in my life. The first one happened 25 years earlier when the dove landed at my feet. The second one when the black bird crashed against my windshield. Although those are separate stories, they all form part of a larger narrative.

Since then synchronicities of "lesser" nature occur to me very often.  Or perhaps it is that now I pay attention to the meaning of seemingly unrelated events.

For about a year I had been practicing a standing exercise, which comes from the Qigong tradition, called "the one to ten meditation" just before shiatsu sessions. I had been doing this every single time prior to a healing session with one of my clients. And the intention is to prepare sacred space and a sacred vehicle (my body, soul and spirit) before engaging with the client.

I must now recount the basic process of the meditation or otherwise there would be no context to understand what happened as a consequence of it. The One to Ten meditation is used by a healer prior to enter the treatment space and it goes something like this:

One is fun - I imagine a ball of energy dropping down through my body from above, washing over me like a shower of light;
Two is shoe - I imagine my feet melting into the ground;
Three is tree - I imagine roots growing from the feet and extending down deeply into the Earth;
Four is core - I bring Earth Qi (roughly translated as energy ) from Mother Earth, just as sap in a tree, into the lower belly area, as I breathe while the belly or lower dan-tien, (which is the term used in Traditional Chinese Medicine) fills with golden energy;
Five is alive - the energy at the lower belly spills over and extends upwards into the upper limbs through a central channel, or tube some call a prana tube and fills the heart and chest;
Six is thick - all the energy accumulated within me so far pours out of the fingers and floods the space I am in with a thick energy like a mist;
Seven is heaven - a beam of Qi from Father Sky above enters the crown of the head, moves down along the pranic tube and mixes in with the Earth Qi still flowing within;
Eight is gate - all of the energy that was projected into the surrounding space now enters back into the body through all the 'gates' or openings, including the pores on the skin, invigorating and charging it like a battery;
Nine is shine - the gathered energy is now totally re absorbed and fills the center axis of the body from head to tailbone and then I imagine the prana tube thus formed as a fluorescent tube, shining a pure white light which fills a sphere within which I am contained.;
Ten is invoke which means uttering the three invocations - 1) I invoke the Divine (basically meaning invisible to regular sensing) for the emptiness of Ego leading to direct knowing 2) for harmony, love and light in the treatment space and 3) for the highest good of the client naming him or her by name.

So all this could be thought of by the skeptic in most of us as pure bullshit. But here comes the synchronicity that proves this is NOT the case.

I was standing at Allen Gardens near Carleton and Sherbourne in Toronto in the middle of the most open space I could find.  There is a beautiful green house in this park that is one of my favourite places in the whole world, but that's beside the point, except perhaps for the Love that being near there invokes in me.

So I am talking in the cell phone to my sister in law, busy pacing back and forth through the many pigeons in my immediate vicinity. As I pace the pigeons always maintain a respectful distance as is always the case and one hardly notices this. Suddenly I realize there are only 8 minutes left to my next appointment. I urgently say goodby to Roseann my sister in law and put away the cell phone. The lingering feeling of wanting to help her and my brother to have a happy life still lingers in me. In other words, love lingers, and I think this is a key ingredient. But I will explain this in more detail somewhere else.

Now I must decide, do I go directly to my healing session or do I do the One to Ten first, which means I maybe a little late? The decision comes quickly. For sure I will do the preparation first even if it is "just" a quickie.

So I begin: one is fun, two is shoe, three is tree, four is core, five is alive, six is thick, seven is heaven, eight is gate, nine is shine and ten is invoke...

I stand in a most relaxed way, with feet shoulder width apart, relaxed knees and arms hanging loose but with open hands extending the fingers slightly, the tip of my tongue touching the roof of the mouth, breathing soft and effortlessly, my weight slightly swaying from heels to toes with every breath. My entire consciousness sinks into the guts of the Earth as I stand on it, grateful for being alive.

I turn the palms gently outwards and begin to lift the arms in a semi circle as I breath in and am about to say "I invoke the Divine". At this point my eyes are closed and my arms have not completed even a third of the semicircle, and I have not even finished saying "I invok...", when I hear a big noise all around me. It sounds like something familiar which nevertheless I have not heard before in this volume: gwrrgwrrrrwwgwrr!

I open my eyes while my two hands are still mid way in the air and I see what seems to be every single pigeon in the park flying at high speed towards me. I am frozen in time and astounded expecting the birds to crash into me any second.

Then they all settle down in front of me, like snow in a pattern. I look around and the birds are not just in front of me but also behind and on every side of me, forming a perfect circle at about three or four feet away from me, with several squirrels also in the mix. They are all looking at me with one eye or the other, kind of like wondering, "ok, so what's next?"

I look around thinking there must be a crowd of people witnessing this amazing event. But all I can see is a sea of birds extending in the distance. I am totally alone and I feel blessed and thankful and I immediately understand the meaning of this.

I have received a huge confirmation that my performance of this daily ritual was not at all bullshit, after all.

And later I rationalize if birds can feel it, and their energy or Qi is moved by it, so can people, and so can the internal organs, and the energy, or Qi, in the meridians connected to these organs I work with.

Human beings, we are part of a vaster and mysterious whole that can only be understood at the deepest level when we abandon our rational mind and use our hearts to feel our way.

The birds, they are pure heart, they know.