Over a month ago, a truck load of us drove 4 hours directly after work to Merritt for the very anticipated Planter's Ball. Maybe it seems like an extreme commute for only one night of partying but never had a planting party been so hyped up in 10 years of this shit. It helped that we had been the satellite crew of the company and hadn't interacted with other humans other than the 11 of us in over a month. We hadn't really partied in that time. We had a lot of pent up energy, let me tell you. There must have been at least 15 companies and over 200 planters that showed up to wreck havoc on Merritt. Here are a couple of sketches from my epic night. I didn't bring my camera out which I now deeply regret because I could have captured a sludge puddle at the bottom of a motel pool on fire with costumed boys running around it and falling in, dripping with what looked like diarrhea water. 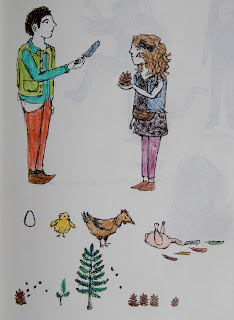 After the bar closed I found a pine cone in a parking lot as I had a heart to heart with my sister. At first I thought it was a lucky pine cone to receive such attention and have an opportunity different from all his brother and sister pine cones, but then we realized that maybe the pine cone wouldn't consider itself lucky, so we decided it was safe to say it was a special pine cone. Then on the way to the Sandman Motel for the after party, I ran into this guy who had a feather. At first I made fun of it because it was a shitty died blue feather (and the guy was a bit slow) but then he offered it to me and I realized it was as special as my pine cone. I refused the gift as it was already costing me enough energy lavishing my pine cone with so much attention. 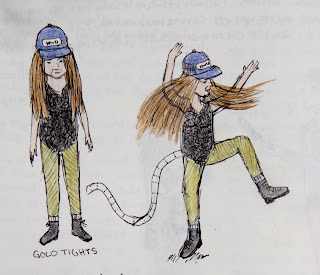 This is gold tights. She was wild. She made her grand entrance by climbing over the pool fence (although there were ample entrances that required no climbing) with a stream of toilet paper flowing from her ass as she danced around with exaggerated movements. She came up right close to my face one time, and I was super confused because she looked really old, but I wasn't in the right state to be making those sorts of judgements. Throughout the night she continued dancing and acting like a savage. At one point she squatted down by the sludge puddle of diarrhea water, cupped some in her hands and poured it all over her body. In the morning she climbed from the ground floor of the motel up to the balcony where we were hanging out and it turns out that it's true, she's almost 50 and pumps out tree planting children.
Posted by Y-BOT at 2:49 PM 2 comments:

I was driving with Dylan in his tiny '84 (or '82?) Toyota Tercel early early one day off and he told me that Aspen technically are the largest organism in the world. Apparently when they are in big clumps they are all actually part of the same root system and clones of each other. I decided not to look it up, but this is what it made me think of. I drew it about a month ago, also the picture is shitty, hard to get a good shot for some reason. I'll scan it in Vancouver. 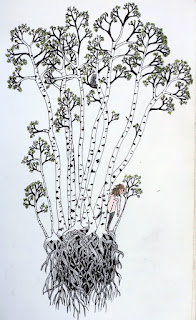 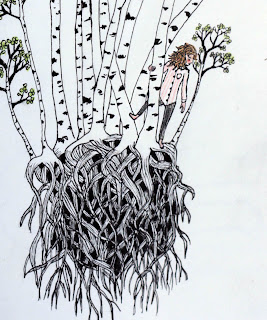