A short little music video by the band Jaguar Mode (featuring Long Blonds) masterminded by Garrett Jones and Adam Gilmer that I did the filming for last week at God's Pocket. Sadly, to the dismay of their many fans, both Jaguar Mode and Long Blonds are now broken up.


http://www.youtube.com/watch?v=eb3FLAWv_B8&feature=share
* The embedded code isn't working properly and is cutting off the video for some reason so go directly to youtube to watch the video full frame.
Posted by Y-BOT at 3:23 PM No comments:

Howling at the Moon

The only evidence that remains of a surreal night on a mountain top in the middle of nowhere at God's Pocket. Made for Garrett Jones on his birthday. 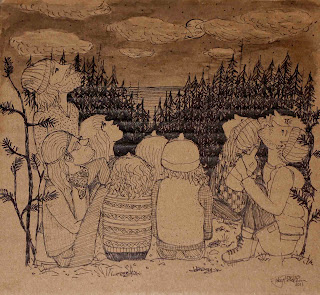 It was my last week in Barcelona so I was trying desperately to tick everything off my check list, which inevitably involved me getting into sticky situations which make me question if my subconscious is trying to make me miss my flight.

These are obviously nothing new, but it is the first time I officially put them in the street. It seemed fate was against me because the first night I went to paint them I got scared off by street cleaners and police cars leaving the wall with only the first layer and my registration pegs. I went back two days later and the pegs were still there, so almost a week later, I went by myself at 4am to finish the job. My life is now complete. It's in the industrial area of Barcelona, Poble Nou, near one of the major clubs, Razzmatazz. Some douche bag already ruined the first girl but really I don't blame him cuz she was only one layer for a week and asking for it. 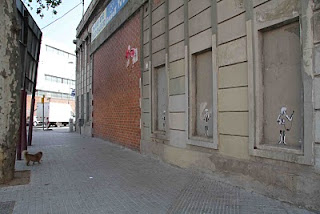 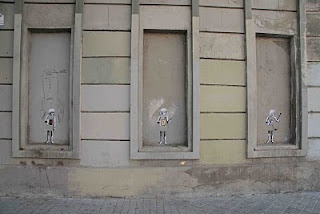 This was a sad tale. These things looked fucking awesome on the street and when I went back a day later to take the photos they had already been brutally ripped down! Luckily my friend, Michelle, was there the night of and took some photos and made me a little montage of the two sides of the piece. The reminants can be found on a tiny street in El Born. 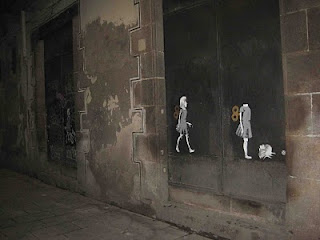